STATISTICS from 2020 look a little different to other seasons. With only 17 games per club and 16-minute quarters, the thinking for coaches who like crunching the numbers had to change. 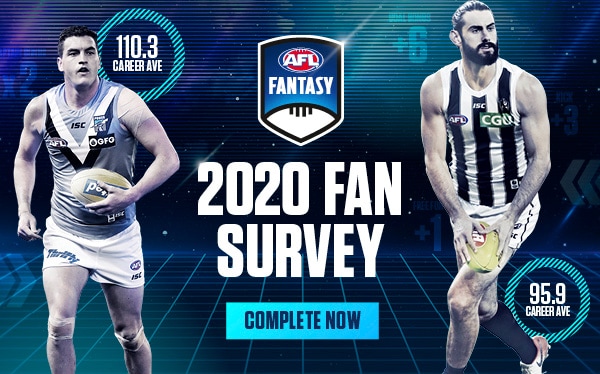 A quick calculation of multiplying 2020 scores by 1.25 to get the ‘BCV’ score (before Coronavirus) gave us a figure to understand how scores translated to previous seasons. In 2019, 29 players averaged 100 or more, this year 37 players averaged 80 or more (the equivalent to a Fantasy ton of past years).

Despite the increase in players’ averages at the top end of the scale, there was a small decrease in the equivalent average score for all players. In 2019 players averaged 66 Fantasy points per game while this season the average dropped to 64 (adjusted).

As per other season, the bulk of the Fantasy points are scored by the midfielders. Lachie Neale was the Dane Swan Medallist as the most valuable player/pig this year, producing his best season to date. Jake Lloyd was the best defender by a whopping 205 points while Reilly O’Brien impressed to be the second best ruckman of 2020.

It was little surprise that the highest score of the season was scored against the Crows. Marcus Bontempelli (145) enjoyed a day out as did other midfielders such as Zach Merrett (138) and Clayton Oliver (131) to make the top five for highest scores this year. Adelaide conceded the most Fantasy points in 2020 averaging 1.5 scores of 100 or more per game, a huge effort in shortened quarters.

While ownership figures change throughout the course of the year, the big names were at the top of the list come round 18. Brodie Grundy was the ruck of choice in Fantasy Classic and was also the consensus No. 1 selection in Fantasy Draft.

Making his debut in round four, Fremantle’s Caleb Serong got better as the season progressed. The Michael Barlow Medallist for the best cash cow of the year scored 101 in the Fantasy grand final. Serong added $85k in the final four rounds. The No. 1 selection in the 2019 NAB AFL Draft, Matthew Rowell, was on track to break all record before a shoulder injury ended his season in round five. Even with a zero points to his name in that match, his $257k price increase in that short period is a thing of Fantasy legend.

Injury was a major factor in Jack Ziebell’s hefty price drop this season. He was injured in round one on 22 points and didn’t register a stat before a first quarter injury in round seven. After averaging 104 last year, Jarrod Witts was well below his best, frustrating his Fantasy Classic owners, but even more so those who drafted him in Fantasy Draft expecting a similar output.?

Nailing players who out perform their previous season is one of the keys to success in Fantasy Classic and Draft. Of the players who played 10 or more games in the last two seasons, Luke McDonald had the biggest average differential (2019 figures adjusted to 80 per cent due to 16-minute quarters in 2020). The defender enjoyed a hot patch of form mid-season when he averaged more than 100 over a six-week period. Christian Petracca and Andrew Brayshaw lived up to the pre-season hype to breakout in a Fantasy-sense this year.

Role changes was the reason for some of the players who played 10 or more games in the last two seasons to decrease their average. James Harmes and Ben McEvoy were used in defence while Mitch Wallis was predominantly played in the forward-50.