FOR MANY, the lure of winning the grand prize in AFL Fantasy Classic – this year a Toyota Hilux valued at over $62,000 – is a motivating factor for playing the official Fantasy game of the AFL.

This year's top coach didn't even know about the major prize until a couple of days before he secured the keys.

Trent Sutcliffe has been a Fantasy fanatic for a number of years and managed to navigate the challenging season to beat more than 120,000 competitors to be crowned the 2020 champion.

The coach of aluniesheis, named after his daughter, racked up 31,991 points over the 18 rounds, 125 points ahead of Treadda’s Spreaders in second place and 146 ahead of Pressure Point Energy in third.

Leading the competition from round 14, Trent's addition of Tom Rockliff in the last few rounds helped him claim victory.

"After Roy brought up on the podcast a text from Rockliff, that made me think I would bring the Pig in and VC him against North Melbourne," the father of four said when he had to trade out Stephen Coniglio.

Rockliff scored 122 followed by another 122 and finally 105 in his last match.

But every trade wasn't as successful.

"My family, who all love Fantasy, too, and my son who looks over my shoulder was starting to feel the stress in the last week as I was crying into my milk over Mark Blicavs."

Trent used one of his round 18 trades to bring in the Cats’ DEF/MID who scored just 37 in the final round.

Despite the clanger trade, the Christian pastor of an Anglican Church in Western Sydney, shares his journey that saw him finish the season as the No.1 ranked Fantasy coach in the country.?

When did you think you were a chance to win?

Winning was always a pipe dream. I have always loved AFL Fantasy and my ultimate desire was to just win a cap. A mate told me about the car halfway through round 18 as my focus was enjoying the competition and just giving it a crack. I thought I might have a chance when I traded in Brodie Smith and Adam Cerra for round six and my ranking was 27 at the conclusion of the round. I started to seriously ponder every decision and my strategy after round 10 when I went from ninth to second after trading out the injured Max Gawn to Oscar McInerney and by some fluke of luck it worked.

What was your strategy with your starting line up?

I spent a few hours researching teams and players, listening to the Traders' podcasts and making spreadsheets. I tried to channel my inner Selby (2017/2018 Fantasy Classic winner) and go for rookies and under-priced players who would at least begin the season well. I started with the rookies who would score well, as opposed to other seasons when I chose the cheapest rookies. I think a strategy which worked early and throughout the season was paying up for rookies who have job security and points potential. So, I had Matt Rowell, Jarrod Brander, Tom Green, Curtis Taylor, Lachlan Schulz and Brandon Starcevich. There was value in the rucks, so I opted for Sam Jacobs and Sam Naismith and used the spare cash to go for five value mids in Lachie Neale, Jack Macrae, Tom Mitchell, Patrick Cripps, Stephen Coniglio and Andrew McGrath. I had no confidence in the forwards, so I played it safe and locked in Lachie Whitfield, Christian Petracca, Andrew Brayshaw and Bailey Smith and they stayed in the side throughout. What were your key moves early on?

The aim after the competition's shutdown was to fix mistakes quickly, which meant Dylan Roberton and Michael Hibberd had to go for Jeremy Howe and Trent Rivers, whilst Sam Naismith went to Darcy Cameron. I also watched time on ground percentages and centre bounce attendances for midfield. I figured I wanted to limit players who were drifting to 70 per cent time on ground, which was why I could never bring myself to trade in Hugh Greenwood as he always spent a massive amount of time off the ground in one quarter of a match which meant his scoring was capped between 70-85. The key move early was navigating the vice-captain and captain options. I was able to captain Neale or Macrae most weeks which covered some of my early disasters like playing Fisher McAsey on ground. This reinforced a lesson for me early, fix errors quick (i.e. when I brought Devon Smith in for one week and he got 47) and take a look at a rookie first and don't be afraid to buy them in the second week like a Rivers, Lachlan Sholl, Jake Riccardi or Damon Greaves. Although it meant I couldn't get Caleb Serong.

How did you adapt to the changing landscape of the game?

I changed my strategy when the game changed, which was great as it kept me engaged throughout a round. The ability to use the loophole throughout a round with both vice-captain loophole and emergencies on ground probably helped me win. For example, I was able to risk the last 3 weeks by looping Sholl or Greaves through Rory Thompson. The three trades a week was a massive blessing, as it enabled you to do 2 things in round; namely fix a problem and still upgrade to a premium. For example, I could sell an injured or sacked player like Gawn and still upgrade two positions on ground.?

What were the best trades you made?

I was wanting to channel my inner Selby and Calvinator's 'Scale of Hardness', that is chose a player the week before you think others will want him and if they play an easy team, like North Melbourne or Adelaide than go for it. Round 11 became the perfect storm for this.?Max Gawn (RUC, $920,000) to Oscar McInerney (RUC/FWD, $444,000) based on Stefan Martin being injured and Brisbane playing Western Bulldogs. I thought he should score at least 60 which is probably going to be more than my M8 which was Marlion Pickett. This meant by round 11 my M8 was Coniglio and I hoped to just focus on the other lines.?Marlion Pickett (MID, $442,000) to Taylor Adams (MID, $775,000) based on Adam Treloar being out and Adams' scoring without Treloar. My round 11 trade - William Hamill (DEF, $286,000) to Jackson Thurlow (DEF, $481,000) - was to take advantage of Thurlow's 80 from the previous week in his upcoming bye and I needed to sell Hamill after he got knocked out the previous round.

Did everything go to plan?

I had so many failed trades. My son, after the Geelong v Sydney game, was calling me a Blicavs rather than Rich as I changed from Daniel Rich to Blicavs based on the Brisbane weather. Worst trade of the season was bringing in Devon Smith and seeing him score 47 or Joel Selwood doing a hamstring on just six when I had him vice-captain.?My son teased me for weeks for bringing in Andrew Gaff and then he scored 51, we would watch Eagles games and yell at the screen "Stop running near the ball, with that head tilt and go to the ball", and Darcy Byrne-Jones in round eight who never scored well again until after I traded him back out.

How much effort went into claiming your win?

I owe it all to the Pig and Leon Cameron. Roy's love of the Pig and Cal's Scale of Hardness encouraged me to take the punt on Rockliff against North and make him vice-captain. Leon Cameron dumped Coniglio who I was trying to trade but couldn’t as I wanted to upgrade Todd Goldstein to Gawn. But Cameron forced my hand by omitting Coniglio, and I brought the Fantasy Pig in and got 244 for him as looped captain. Combined with looping Sholl and Greaves it gave me positive shot at the title going into the last week, where Taylor Adams and Lachie Hunter carried me through. After the last game my family said the new car will be called the Adams Family Car in honour of Adams’ effort. I started looking at other teams only before the last round and so I brought Gawn in round 18 and captained him as insurance against other teams, thinking most teams in the top four will captain Gawn. I tried to just back my research, focusing on the players with point scoring value against upcoming opponents. That doesn't always work, I avoided Matt Crouch and Jack Steele thinking Matt De Boer would tag, but he tagged Brodie Smith and didn't play against St. Kilda. I also avoided inconsistent players like Zach Merrett.

Was the final round nerve-racking?

I was nervous the entire weekend, but mostly when Callum Sinclair was obliterating Blicavs in the ruck and Patrick Dangerfield was practicing social distancing in the first half. I had the app on the entire game and wondered if Blicavs was still on the ground. The key matchup for the win was Lachie Hunter v Josh Dunkley and Hunter's 119 against Dunkley’s 56 was critical (with a special mention to Blake Acres) and it gave me a 107 lead overnight with Adams, Jack Crisp and Rockliff left. 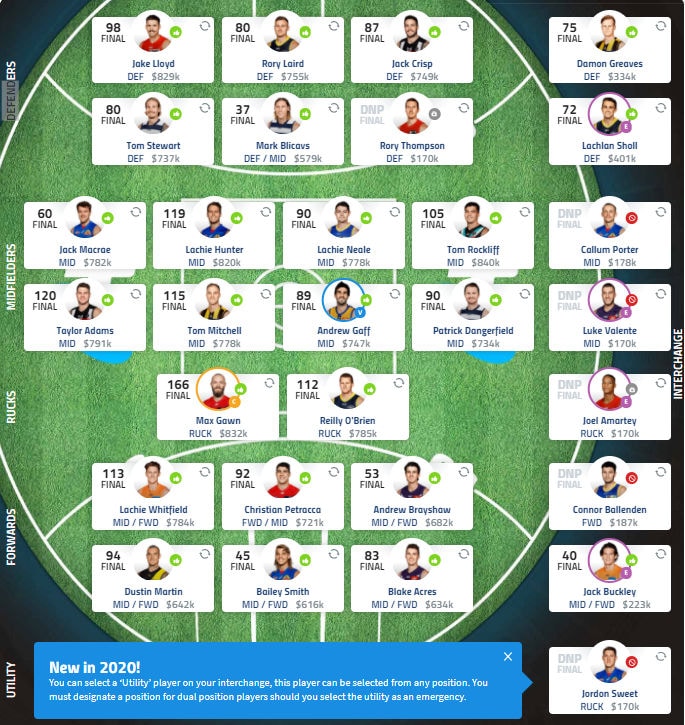 What advice do you have for Fantasy coaches that aspire to win the competition in 2021?

Be the butter mouse! Keep churning, keep enjoying, trust your strategy and take risks based off it. Sometimes it will work, sometimes it won’t, but at least you had a blast giving it a go. Do your research, make a list of players across all four lines which you think right now will improve in 2021. Do it whilst it is fresh. Players who you liked near the end of the season, like B. Crouch at a new club, McCluggage if 20-minute quarters, Treloar if fit or an up and comer with a role change like Hunter Clark if named in the midfield, but chosen as a defender for fantasy or possibly new rucks like Darcy or Draper for R2. Also, whilst fresh, keep your list of never again players handy and bring out at the start of the season – Patrick Cripps, Angus Brayshaw, Josh Kelly, Todd Goldstein, Mitch Duncan and do not trade them in ever. Overall, research under-priced premiums you believe will increase in value and don’t be afraid of a POD, unless it is Mark Blicavs.?

It was a new era at Freo with former player Justin Longmuir taking the coaching reins, and they earned plenty of admirers